Your Deck of Ancient Symbols Card for Today 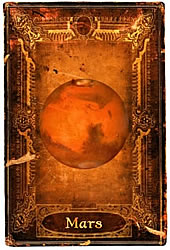 Mars represents those qualities we commonly associate with the male/yang persona. Mars traits include raw energy, ambition, aggression, confidence, passion, and a sense of adventure. The occurrence of Mars denotes the dominating presence or need of the qualities listed above. Martian influence may have a negative impact unless it is balanced with an influence that can blunt the brashness and impulsiveness of Mars.

As a daily card, Mars suggests you would be well served by allowing your more aggressive side take control for at least for a short while. Now is a time for you to act with confidence and decisiveness. However, keep in mind that the qualities associated with Mars can do more damage than good if allowed to run free for too long.