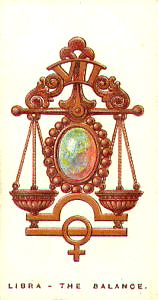 This aspect of your life will be strongly influenced by a person who is diplomaitic, urbane, romantic, charming, easygoing, sociable, idealistic and peaceable. This person is someone you know socially.

Seventh sign of the Zodiac, Sept 23rd to Oct 24th. Venus is the ruling planet; correct metal, Copper. Those born under Libra's influence were supposed to be affable, courteous even tempered, painstaking, and with marked perceptive qualities. The Libra stones are the Opal, Chrysolite and Sardonyx. To the ancients the Opal was the Stone of Mystery its flashing and glowing rainbow hues suggested occult powers, and it was regarded as sacred in the East. In India it was believed to strengthen the mind and clear the brain; in Greece to give the wearer the power of prphecy and foresight, and druing the 14th century used for strengthing the eyesight.

Get Another Free Charms Cast