Astrology Forecast for April 2013 - General Tendencies for All Sun Signs 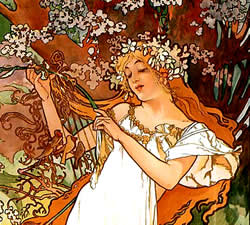 March's nightmare will end instantly on April Fools' Day. Mercury's retrograde and all those planetary battles from March will quickly become ancient history, and we will settle down to a more comfortable pace. There could be a disturbance around April 12th, but outside of those few days, life could actually become so easy, that the eclipse on April 25th will catch us off guard. Get busy and make the most of April's fair stars, because the tides will turn sooner than we think.

April Fools' Day, April 1st, could begin quite blissfully. The April Fools' jokes will mostly be taken with a light heart and an open mind, so plan your best! The rest of the week should be uneventful with nothing but lunar events in the sky. We may find we get some extra work done and even come up with new ideas to make our work easier.

The weekend of April 5th could bring a little Spring romance, and others may decide to spoil themselves with Venus and Mars joining forces behind the Sun. Our creative energies will be strong, and there could be some special magic in the air. Our intuitions should also be strong, and psychic readings will be accurate.

Those of us in the Western hemisphere will be beginning the week of April 8th under a void of course Moon, so it could be a "Blue Monday." But, it won't last long. Our energy and our drive will return by afternoon, and we may be ready to start something new. The Aries New Moon will occur early Wednesday. I usually encourage my readers to write their wish lists on the New Moon, but the Aries Moon wants action - not thoughts. Is there a new project you've been thinking about (like maybe painting the bathroom or changing your hair color)? This will be the time to begin. Projects initiated at this time will have a strong chance of success.

We could be feeling restricted and uptight as the weekend of April 12th begins. In fact, we may have found those feelings gradually increasing as the week progressed. Pluto will be turning retrograde, so be very, very gentle with your Scorpio friends. Saturn and Uranus will also be out of phase, and that could impede our progress. But, most of the confusion and tension should have lifted by Sunday, April 14th, and we will be ready for fun, friends, and travel.

The week of April 15th should begin on a lively note with the Moon dancing naked in Gemini. We may want to call it a "Pink Monday!" And, the week will continue to get better. Mars will be exactly aligned behind the Sun by midweek, and that could shine the limelight on our careers. Our energy will be high, and as long as we can navigate the office politics, we may get noticed. Venus and Neptune will begin dancing as the Sun passes Mars, making miracles a good possibility on Wednesday and Thursday, April 17th and 18th.

We may hit a few bumps in the road throughout the weekend of April 19th, with Mercury taking pot shots at Saturn, Uranus, and Pluto. Think, think, think before you speak this weekend, or foot in mouth disorder could overtake you. Even worse, you could say something to cause the permanent loss of a friend or loved one. Also use caution driving, and travel delays are possible.

We may awaken on Earth Day, Monday, April 22nd, feeling kind of burned out. Stick to routine chores and maybe even a little aggressive housework to shake off those heavy feelings. The week will be improving quickly, possibly as soon as Monday night. Many of the planets will be dancing and singing this week, but smack-dab in the middle of it all, we have a Full Moon Lunar Eclipse. People could get very excited this week, and some may have poor judgment. If you are tempted to cheat or lie this week, think twice, think three times. It is very likely you will get caught. If we can stay focused on "the straight and narrow" this week, we may actually find we accomplish some of our goals.

The weekend of April 26th will begin on a very romantic and creative note, but by Saturday, Mars and the Sun will begin a battle with Saturn. This battle will continue through the end of the month. Its is quite probable that a large amount of work will demand our attention, but we may find ourselves unable to act. Our energy will come in spurts, if it comes at all. If you got busy earlier this month and got ahead at work, take a few days off. The last few days of April would be great for any kind of constructive work on the recliner or the sofa.