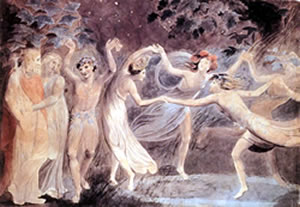 A different world, a realm that exists beyond our ken, a plane in which live pagan creatures of the woods. Where do these wee folk come from? There are many myths and legends describing the origin of faeries.

In one myth faeries were originally immortal beings that lived in Italy. With the spread of the Roman Empire they traveled to France and the British Isles. However, the Nymphs and Dryads kept them out of Greece, and pixies out of Cornwall. Originally, faeries were thought to bestow gifts upon children and punish evil adults, but slowly their interference spread to all parts of human life.