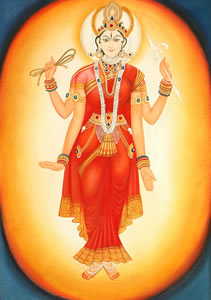 Shakti is a Hindu term that refers both to feminine divine energy and a goddess. The definition of shakti means sacred empowerment. Shakti is the sacred primordial dynamic energy that pulsates throughout the universe. Shakti is also the Hindu personification of the divine feminine energy that animates all living things. Shakti is known as the divine mother in Hinduism. She is not only an agent of creation, she is also a catalyst for change. Shakti is said to exist independently, while being interdependent with the entire cosmos.

The Goddess Shakti is also know as Lord Shiva's consort. It is said that unless Shakti and Shiva unite, the potential of the universe is nullified. A wonderful story out of Hindu mythology that illustrates this point is as follows. One day, in a remote mountainous area of India, Shankaracharya refused to believe in the existence of Shakti. He adamantly only prayed to Lord Shiva. A few days later, he was completely spent, without any energy at all. He lay down on the ground like a dead man. He was unable to move at all. He was quite dismayed because he was a great devotee of Lord Shiva.

Vaastu Shastra Tips For Peace & Harmony In Your Home 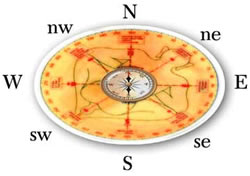 Vaastu Shastra is the ancient Indian science of architecture and interior design. According to modern historians Ferguson, Havell and Cunningham, this science developed during the period of 6000 BC and 3000 BC. Excavations at Harappa and Mohenjodaro also indicate the influence of Vaastu Shastra on the Indus Valley Civilization.

The principles of the science laid down by great Indian sages and architects were based purely on the effect of sunrays during different times of the day. The observations and corrections made were noted and concluded only after in depth screening of the situation. For most part thus, it is seen that Vaastu Shastra talks about the direction in which objects and artifacts should be placed, the direction of entrances and exits and the shape of the property or building under discussion. To improve or enhance peace and harmony in your home Vaastu Shastra recommends the tips below.

Boost Your Business With Vaastu Shastra

Whether an established conglomerate or a fledgling company, a business in the red or black, from home or from office - everyone loves a helping hand. If the tooth fairy existed life would be much simpler, but since she hasn't paid us a visit in a long time Vaastu Shastra might be a good alternate.

Vaastu Shastra is the ancient Indian science of architecture and interiors. Based principally on the movements of the suns rays, the principles of Vaastu mainly talk about eight main directions and their impact on various aspects of our life - including our financial well being. Given below are some tips to help to in whatever financial endeavor you choose.