I felt the breath of the spring, and accompanying the fragrance of violets and lilies-of-the-valley I heard the tender singing of elves. Rivulets murmured, the treetops rustled, the grasses whispered, innumerable birds sang in choruses and bees hummed; everywhere I felt the breathing of joyful, living Nature.

The sun shone tenderly and softly and a little white cloud hung over the woods.

P. D. Ouspensky's Journey Through the Major Arcana: The World

An unexpected vision appeared to me. A circle not unlike a wreath woven from rainbow and lightning, whirled from heaven to earth with a stupendous, velocity, blinding me by its brilliance. And amidst this light and fire I heard music and soft singing, thunderclaps and the roar of a tempest, the rumble of falling mountains and earthquakes.

The circle whirled with a terrifying noise, touching the sun and the earth, and, in the centre of it I saw the naked, dancing figure of a beautiful young woman, enveloped by a light, transparent scarf, in her hand she held a magic wand.

P. D. Ouspensky's Journey Through the Major Arcana: THE WORLD

An unexpected vision appeared to me. A circle not unlike a wreath woven from rainbow and lightning, whirled from heaven to earth with a stupendous, velocity, blinding me by its brilliance. And amidst this light and fire I heard music and soft singing, thunderclaps and the roar of a tempest, the rumble of falling mountains and earthquakes.

The circle whirled with a terrifying noise, touching the sun and the earth, and, in the centre of it I saw the naked, dancing figure of a beautiful young woman, enveloped by a light, transparent scarf, in her hand she held a magic wand.

When I lifted the first veil and entered the outer court of the Temple of Initiation, I saw in half darkness the figure of a woman sitting on a high throne between two pillars of the temple, one white, and one black. Mystery emanated from her and was about her. Sacred symbols shone on her green dress; on her head was a golden tiara surmounted by a two-horned moon; on her knees she held two crossed keys and an open book. Between the two pillars behind the woman hung another veil all embroidered with green leaves and fruit of pomegranate.

And I saw another man.

Tired and lame he dragged himself along the dusty road, across the deserted plain under the scorching rays of the sun. He glanced sidelong with foolish, staring eyes, a half smile, half leer on his face; he knew not where he went, but was absorbed in his chimerical dreams which ran constantly in the same circle. His fool's cap was put on wrong side front, his garments were torn in the back; a wild lynx with glowing eyes sprang upon him from behind a rock and buried her teeth in his flesh. He stumbled, nearly fell, but continued to drag himself along, all the time holding on his shoulder a bag containing useless things, which he, in his stupidity, carried wherever he went.

I Saw the Man.

His figure reached from earth to heaven and was clad in a purple mantle. He stood deep in foliage and flowers and his head, on which was the head-band of an initiate, seemed to disappear mysteriously in infinity.

Before him on a cube-shaped altar were four symbols of magic--the sceptre, the cup, the sword and the pentacle.

His right hand pointed to heaven, his left to earth. Under his mantle he wore a white tunic girded with a serpent swallowing its tail.
His face was luminous and serene, and, when his eyes met mine, I felt that he saw most intimate recesses of my soul. I saw myself reflected in him as in a mirror and in his eyes I seemed to look upon myself.

An Analysis of Tarot Cards

Excerpted From
The Secret Teachings of All Ages (1928)

OPINIONS of authorities differ widely concerning the origin of playing cards, the purpose for which they were intended, and the time of their introduction into Europe. In his Researches into the History of Playing Cards, Samuel Weller Singer advances the opinion that cards reached Southern Europe from India by way of Arabia. It is probable that the Tarot cards were part of the magical and philosophical lore secured by the Knights Templars from the Saracens or one of the mystical sects then flourishing in Syria. Returning to Europe, the Templars, to avoid persecution, concealed the arcane meaning of the symbols by introducing the leaves of their magical book ostensibly as a device for amusement and gambling. In support of this contention, Mrs. John King Van Rensselaer states:

Court Cards give readers fits! Do they represent the person being read for? other people? if so, what other people? HELP! Who are they???

A simple approach to Court Cards is the Family Reunion.

If you've never been to a "gathering of the clan," try to imagine one. It may look something like this: Cousin Tom (a childhood bully) runs around telling everyone how much weight they've gained. Right behind him comes peacemaker Howard, explaining how Tom didn't really mean the things he said. Across the room, egocentric Aunt Helen has cornered quiet Brother Billy, and is torturing him with unending stories of how she strategized a hostile take-over of her competitor's company.

Of the 450+ tarot decks I own only three actually "speak" to me, and of those three the Sola Busca speaks the loudest. The Sola Busca deck being published today originates from a 19th century reproduction created in the style of the original 16th century deck. The Sola Busca strays from what is generally considered classic Tarot iconography. The Trump cards are images of famous people, mythical creatures and angels who were historically significant at the time the deck was originally created. Today there is much conjecture as to who these figures are, it's likely that the passing of so much time has made it impossible for us to ever ascertain their identities beyond doubt. The pip cards in the deck also rely on human related images to convey there symbolism.

What does a typical Tarot deck consist of? 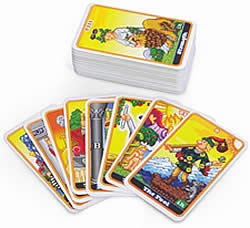 Tarot reading like most other New Age beliefs relies more on intuitive feelings than on ay scientific explanation. This is what makes finding the perfect deck the most difficult task in Tarot reading. One needs to find a deck that 'speaks out' to one. With the wide variety of decks available its possible you may need to go through several before you find the 'right' one.

While there is a wide variety of decks available that use different symbols, they all represent the same things. A typical tarot deck consists of 78 cards, divided into the Major and Minor Arcanas.

How To Do A Celtic Cross Tarot Reading 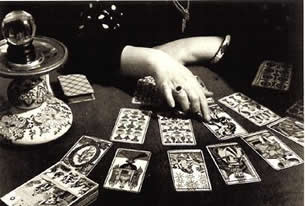 The Celtic Cross is one of the most popular Tarot spreads and is used widely. It is good for looking at a particular question, or to get a general feel of the situation. This spread will work with just about any Tarot deck or divination deck.

Layout:
The Celtic Cross layout uses 10 cards. Some people like to use a significator as well, selected during the prepatory phase. The significator is laid face up on the table, with the first card being placed face down on the significator. The second card goes across it and the third, fourth, fifth and sixth cards go around the center two. The remaining four cards are placed in a row to the right of the center cross.

Integrating Other Symbolic Systems with Tarot 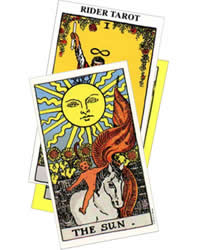 Astrology
Many people have tried to work out correspondences between astrology and the tarot-and then someone else comes along, disagrees with them, and works out a new scheme, which also has its advantages and its drawbacks. Jessica and Nancy believe that the court cards can sensibly be assigned zodiac connections, but not the rest of the cards.

Some people prefer to leave astrological connections out of their interpretations altogether. Whatever system you decide to use works best if it is just what works well for you--what fits well in your understanding of how both systems work. And you needn't add anything like this if you are more comfortable (and therefore more accurate) in simply reading the symbols on the cards without reference to other divination or philosophical systems.