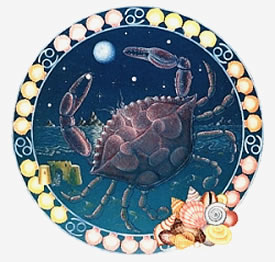 The nodes (south and north node) are two points in an astrological chart that possess priceless information about one's karmic past and soul-destined future. Calculated by using the birth data of the individual, the nodes symbolize the unique life path that one is on and can answer many questions about his own, as well as his partner's, inner struggles and desires -- answers that can transform not only his relationship but his life.

Since there are twelve signs of the zodiac, there are also twelve unique nodal positions -- each pair of nodes (north and south) representing two opposite signs of the zodiac. For instance, a Cancer Sign North Node is paired with a Capricorn Sign South Node because they are opposites. And because they are opposites, they create a clear picture of the dualistic struggle that resides within the Cancer north node/Capricorn south node individual.

Often, the individual is unaware of the war taking place inside, a situation that could go on for years. As time passes he is dumfounded by his inability to progress in life - professionally, emotionally, and spiritually. He doesn't understand why he keeps repeating the same mistakes over and over again and continues to dwell on the past as he desperately dreams of the future.

All of us have our own set of visible (and invisible) struggles to work through -- obstacles that the Nodes of the Moon can help us isolate and resolve while simultaneously freeing us to move forward on our destined path.

We all know that knowledge is power...and that's why I offer a bit of it to you...to give you the strength and courage you need to not only live, but thrive.

This week I'd like to begin with a brief overview of the Cancer North Node/Capricorn South Node position.

To start, let's take a look at some keywords. These words describe the polarity between these two opposing signs and can offer you a glimpse of the soul journey that the individual with this nodal position is on.

Just remember that the south node represents old patterns of being - patterns that have accumulated over lifetimes that now need to be acknowledged and released. The north node, on the other hand, represents the soul's potential - the direction of the future...the behavioral habits that will lead the individual to greater happiness and the kind of life that will fulfill him.

Here are some Capricorn South Node behavioral patterns -- patters that the individual must part with if he is to live an emotionally rich life:

Here are some Cancer North Node behavioral patterns that the individual might find foreign at first, but ones that he needs to aspire to if he is to connect to his true potential and the existence his soul both needs and desires:

The journey from a Capricorn south node to a Cancer north node will take some work. But so does everything else that holds so much potential. The key is to never lose sight of the ultimate goal and move towards it until it firmly lies within your hands.

The Cancer north node reveals a soul that has spent numerous incarnations as an opinioned, well-respected, and accomplished member of the community. It worked hard to achieve it's once prominent level of recognition and enters this lifetimes wanting, needing, and pursuing the same prestige it once had.

The Cancer north node individual also arrives with much inner pride. He has vivid memories of the dignified social presence he once had and can't understand why now, in his present life, he is not getting the respect he knows he deserves. As a result, he spends much of his life trying to regain what he feels he has lost.

In addition to pride, the Cancer north node individual also brings with him memories of past hardships as well as the desire to avoid all imperfection; especially within himself. He works harder than most yet fails to accomplish all that he sets out to do. And if he feels that a situation might make him seem inadequate, he will go far out of his way to escape the embarrassment; even if it means making himself emotionally and/ or physically ill.

Karmic residues of materialism and self-righteousness are also not foreign to him. Rarely will he accept the advice of others; secretly thinking that he knows best. Seldomly will he share his honest feelings because he believes in personal privacy and is unable to accept any form of criticism. And being the opportunist that he is, will strategically place himself in situations where there is something to be gained; not hesitating for one moment if offered the chance to use another's weakness for his own benefit. All of this is done secretly of course, as to not damage the respectful image he has worked so hard to create for himself.

Unfortunately, or fortunately, depending on how you want to look at it, the Cancer north node will ask him to leave his rigid ways behind and soften his walls when dealing with others. He will be asked to trade his arrogance for emotional honesty and will be shown the benefits of nurturing and being nurtured. And most importantly, he will asked to gradually open himself up to his Cancerian sensitivity.

At times he might feel the urge to resist this transformation; feeling comfortable with the habits he has come to know so well. Yet life, being the wise teacher that it is, will certainly make sure that he stays on his soul-destined path.

As time goes by, he will begin to value life and family more than money, emotional connectedness more than calculated control and new creation more than old baggage. His soul will teach him that the rock which was once him, is now ready to give way and allow some water to seep in. His soul will help him see that one of his greatest pleasures and achievements in this lifetime will be to nourish others; both in physical and spiritual ways. His Capricorn south node has overfilled his vessel...and so now it is his turn to share its abundance with those who need it.

Having said all that, it might be a good idea to fill your surroundings with as many symbolic representations of the Cancer Sign as possible. Surrounding yourself with Cancer sign colors, Cancer sign fragrances, and Cancer sign ornaments will remind you of the soul mission you're on and help you find your unique path to fulfillment.

Now if it's your mate that has the Cancer sign north node, and you do that for your mate, well...that's about the greatest gift that you could ever give him/or her. Because there's nothing like the feeling one gets when he realizes that he has found someone who really gets him -- a true friend...lover...and the irreplaceable soul companion he's been searching for his entire life.

...that soul companion who is you!

Have an adventurous journey my friend!

Julia Simkin is the co-founder of Romantic-ideas-for-life.com. Always in search of the yet-to-be-discovered, Julia strives to offer her readers inspired ways of looking at both love and life. An Aquarian visionary of both mind and spirit, Julia is a facilitator for those seeking a different truth and deeper meaning. To learn more about your soul mission, go to Julia's North Node Chart to find your north node position or directly to the Cancer North Node Page if you already know that your north node is in the sign of Cancer.