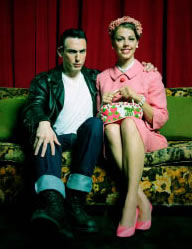 It's the classic story of the Odd Couple: she's the life of the party, while he gives any excuse to leave early. He's orderly and fastidious, while she leaves milk on the counter and clothes on the floor. He's logical, she's emotional; he's from Mars, she's from Venus. Much is made of the idea that opposites attract, and we all know at least one of these "odd couples" that makes a relationship work despite major differences. But is it true that opposites attract? And more importantly, what makes for the most successful relationship-a stimulating opposite or a comforting soul mate?

Many researchers have set out to answer this question. In order to classify their subjects' differences, compatibility researchers often use Myers-Briggs personality typing. The Myers Briggs Type Indicator® is the most widely used personality inventory in the world, and provides an easy-to-understand basis for studies on compatibility. The Myers-Briggs theory asserts that our fundamental differences in thinking, making decisions, and organizing our lives can be understood by measuring our preferences in four key areas:

Extraversion/Introversion: This scale refers to where you focus attention and get your energy. Extraverts are focused on the external world and other people, and are energized by external stimulation and interaction with others. Introverts are more focused on their internal world, thoughts, ideas, and feelings, and get energy from spending time in solitary activity or quiet reflection.

Sensing/Intuition: This scale refers to how you prefer to take in information. Sensors gather information in a very concrete, detail-oriented, and factual way. They tend to be practical and oriented to the present moment. Intuitives tend to be more abstract in their perceptions, and tend to think more about meaning, connections, and possibilities. Intuitives are often more imaginative than realistic.

Judging/Perceiving: This scale refers to how you prefer to organize your life. Judgers tend to prefer structure, schedules, and plans. They like clear expectations and feel accomplishment from completing tasks. Perceivers prefer an open-ended, spontaneous and flexible existence. They enjoy feeling that their options are open and that there are many possibilities available.

When researchers have analyzed couples' satisfaction, the factors most associated with happy couples were those that we've heard all along: good communication, common values and interests, and the ability to work out disagreements calmly and openly. But when researchers Barbara Barron-Tieger and Paul Tieger studied the Myers-Briggs personality type of several hundred couples, they found that the more type preferences a couple had in common, the more satisfied they were with their communication. While opposites may attract, it seems to be easier to maintain a relationship with someone who is similar to yourself.

However, this does not mean that you must find your exact type in order to build a good relationship. In fact, the most common pairing is between two people with just two type preferences in common (for instance, ISTP with ESTJ). Researchers have also found that some type preferences are more important than others when determining compatibility, and that some types are especially likely to clash.

In a 1981 study, researcher Ruth Sherman found that differences on the Extraversion/Introversion scale caused the most conflict in long-term relationships. In particular, combinations of Extraverted women with Introverted men caused frustration, perhaps because this dynamic goes against our traditional concept of the man being the more expressive and dominant partner. However, this effect was found in a study that is over 20 years old. As we become more progressive in our relationships and more open to equality, differences in this preference area may become less important.

The Sensing/Intuition scale seems to play a key role in attraction. Studies by Isabel Briggs Myers and others have found that people tend to be drawn to partners who share their preference on this scale. When couples have a Sensing or Intuitive preference in common, they will tend to view the world in a fundamentally similar way. Couples with the same preference on this scale may find it easier to understand each other, and are more likely to feel they are speaking the same language.

While similarity on the Sensing/Intuition scale may determine attraction, long-term compatibility appears to be much more complicated. The last three scales-S/N, T/F, and J/P-play a complex role in determining compatibility. These scales have a fundamental effect on the way we communicate and prioritize our lives, and so have the potential to cause misunderstandings, miscommunication, and opposing goals in relationships where preference differences exist.

When researchers Tieger and Barron-Tieger examined couples on the S/N, T/F, and J/P scales, they found that, in general, more similar couples experienced a higher rate of satisfaction with their partner. However, there were some combinations that worked well despite having fewer preferences in common, and some pairings of similar partners that weren't quite so successful. Some examples:

Sensing Judgers (ESTJ, ESFJ, ISTJ, ISFJ) have a satisfaction rate of 79% when paired with other Sensing Judgers. These types tend to be traditionalists who value and honor their commitments.

Intuitive, Feeling, Perceiving types (INFP and ENFP) had a satisfaction rate of only 42% when they were paired with Sensing, Thinking, Judging types (ESTJ and ISTJ), although this was one of the more common pairings among the couples studied. The NFP partner is likely to feel that their partner is conservative and stifling, while the STJ partner may find their partner unpredictable and unreliable.

When partners have a Feeling preference in common, this can compensate for differences in other areas, perhaps due to Feelers' inclination to spend more time and energy on their relationships in general. Specifically, Sensing, Feeling Judgers (ESFJ and ISFJ) reported an 86% satisfaction rate when paired with Intuitive, Feeling Perceivers (ENFP and INFP). They had a 67% satisfaction rate when coupled with Intuitive, Feeling Judgers (ENFJ and INFJ).

In some cases, having similar type preferences did not mean higher satisfaction. Sensing, Thinking and Perceiving types (ISTP and ESTP) had only a 33% satisfaction rate when paired with other STPs. The researchers theorized that this is due to their findings that ESTPs and ISTPs are the least concerned of all the types with the quality of their relationships.

Similarly, Intuitive Thinking types (ENTP, INTP, ENTJ, INTJ) have only a 59% satisfaction rate when paired with another Intuitive Thinker. These types tend to be among the most critical of their partners and may be harder to please in general.

Some types are more likely to marry a person of their exact same type; this includes male INFPs, INFJs and INTPs and female ENFJs and INFJs.

There are two combinations where opposites seem to attract: ESTJ men with INFP women, and ESTP men with INFJ women. However, this may be due in part to the fact that these two types of men are also the most likely to be married multiple times.

Some types showed greater partner dissatisfaction in general. Women married to INTP men had the highest level of dissatisfaction, at 31%. INTP is one of the least common types in the population, and INTPs may find it especially important to find a like-minded partner.

We can see that overall, couples find more satisfaction when paired with a similar partner. However, researchers stress that in all of their findings, communication, common interests, and the quality of the couple's friendship were the most crucial factors in determining relationship success. While it may be easier to achieve these goals with a partner who is similar to you, it is absolutely possible even when significant differences exist. When couples make an effort to understand and appreciate their differences, they can turn what might be a problem or source of conflict into an asset for their partnership.

Couples with personality differences who find ways to support and understand each other often find their relationships especially rewarding. Partners with type differences are able to stimulate and challenge each other, and will learn from each other in a way that similar partners cannot. They can also make more effective teams because they are able to notice and compensate for each other's blind spots. Recognizing how your partner is thinking and appreciating the value of his or her perspective, whether or not it agrees with yours, is crucial to a successful relationship.

While compatibility research can be interesting and informative, it is important to remember that every relationship is individual, and every couple can learn better communication skills. When it comes to relationship satisfaction, the big three factors-communication, trust, and respect-can be achieved by any type combination.

Molly Owens holds a B.A in Psychology and has completed graduate work in counseling and psychological assessment. After working in education, mental health, and corporate management, she founded PersonalityDesk to provide the Myers Briggs Type Indicator test online.