Written by: Tania Marie
Published on: May 20, 2012
Category: Spirituality 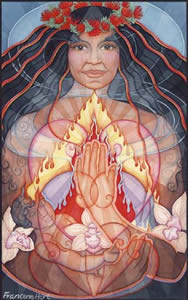 Gaia is etymologically a compound word composed of two elements: Ge, meaning "Earth," which is also a pre-Greek substrate word related to Ki in Sumerian, also meaning Earth and Aia comes from an Indo-European derivative meaning "Grandmother." Therefore, the full etymology of Gaia was once "Grandmother Earth." Most of us know Gaia simply as Earth or Mother Earth; the primordial element from which all things originated, which is what the Romans believed as well. They knew Gaia, the Great Mother, as a single living entity that encompassed the totality of every element in the Universe; land, sea, or sky. The Greeks knew her as an ancient primeval goddess who personified the Earth and whose emergence appeared at the creation of the Universe, born from Chaos. Gaia's power was far reaching in Ancient Greece, making oaths sworn in her name to be the most binding of all. If only such value for her was still a part of our lives, perhaps we'd discover more honor in promise to the planet we live on and more synergy and harmony through conscious, symbiotic care of the collective she signifies.

Throughout the ages and cultures, active worship of this titan of fertile Earth came under the guise of many names and varied forms ranging from reverent bowing to druidic ritual, all in an effort to get more in tune with the rhythm and continuity of nature she embodies. She represented to all, the Earth, or spiritual embodiment of the Earth, and sometimes was the goddess of all creation from which all other gods sprang. Only Egyptian mythology holds a reverse personification, whereas Geb is the Earth Father while Nut is the Sky Mother, as opposed to Zeus as Sky Father and Gaia as Earth Mother. In Indian religions, the Mother of all creation is called "Gayatri," which is a very close form of Gaia. She is the mother of all Vedas, consort of the God Brahma, and personification of the all-pervading Parabrahman - the ultimate unchanging reality that lies behind all phenomena. Many Hindus view connection through the pure love and essence of the Gayatri Mantra as Divine awakening of the mind and soul and a way to reach the most Supreme form of existence. Simply, the mantra helps us reach toward our divine mother and receive her blessings and wisdom to support us through the challenges of life. Gaia's qualities of divine femininity express her desire to nurture mankind and mirror for us, the reverence we have forgotten to honor.

Far too coincidental and divinely synchronous, turtles are the most ancient, vertebrate creatures that also possess Gaia's wisdom and mother energy and through such, have much to impart. Many ancient myths, such as those of the Indigenous North Americans, describe the world as resting on the turtle's back and many still refer to North America as Turtle Island. This is illustrated by their creation legends that tell of a time when Earth was covered by water and Turtle dove to the ocean's depths to bring forth Earth on its back so the people could have a safe, dry home. Like Gaia, these ageless beings have carried a myriad of symbolic meanings throughout the ages and cultures, mysteriously linking them as symbols of the primal mother (except in African lore where it is a male symbol) and lunar cycles; again possessing Earth and Cosmic Universal significance and connection with the center. Far East Asian myth believed turtles brought about the creation of the Universe from its parts, which are said to depict a map of the stars and sacred writings: the shell symbolic of the heavens and used in divination readings, the body symbolic of the Earth, and its undershell symbolic of the underworld. This cosmic order they represent, coupled with the magical ability to support us in uniting heaven and earth within our lives, supports our experience of life as "heaven on earth." They are the only animal to have the honor of symbolizing both Mother Earth and healing waters, as well as personifying winter, humidity, thunder to the Mayans, Venus, Aphrodite, Northern directions, and the moon (most turtle shells are divided into 13 sections depicting the 13 yearly phases of the moon.) Powerfully nurturing and protecting, turtle medicine is beautifully illustrated through shared attributes with its Earth Mother counterpart, Gaia, while their spirit symbolizes profound lessons in light of its own example.

There is a presence and flow of steadfast strength in their deliberate, steady, and thorough approach to a life of non-doing, non-reaction, acceptance, and naturalism. Always at home within themselves, they embody the meaning of "home is where the heart is," understanding detachment and freedom. These carefree, patient, instinctual creatures honor the rhythms of life balance, demonstrate non-violent, self-defense mechanisms, and know when to turn within. Navigating one day at a time, they mirror the importance of moving at one's own pace through life while honoring boundaries. Turtles are survivors; living so near the Earth, moving slowly, aging gracefully, symbolizing groundedness, and embracing courage with faith, as is demonstrated through the progress they make only by sticking their neck out. It is no wonder they are considered the wisest of souls in the animal kingdom, offering a potent and profound analogy for humankind on many deep levels.

So intertwined are the turtle and Gaia; there is no mistaking the significance and association of their deep and profound symbology that seemingly comes from two separate sources, but are synonymously bridged as one. Such contrast between an omnipotent presence and an unassuming innocence and yet the blood lines run through the core of the same essence. Do not be fooled by the book's cover, as both embody the spirit and soul of Earth and beyond and share with us invaluable knowledge and teachings. Across the board, whether known as Gaia, personified as Turtle, called, sung, or chanted by another synchronous name, she is the connection to the Universal mothering and nurturing source that leads us to a deep sense of profound peace and balance within and manifested without. Yet, more than any other goddess, she is consistently identified as the divine and animate Earth Mother; the living, conscious planet we reside on that provides sustenance and inherent wisdom to all of her children. Gaia personifies awareness of our connectedness through the circle of life and the sacredness of all life, be it plant, animal, human, or stars above. She roots her values and respectively ours, helping us to remember that connection and to remind us that respect and gratitude for everything and everyone around us is the ever-present message she hopes to impart. Through this conscious living we can attain that balance and wholeness that is the promise Gaia offers. Shifting our perspective to that of experiencing connection with her as a partner in life worth respect and honor, we can then enjoy the blessings of that union through the daily gifts of beauty and miracles she provides.

Dedicated and inspired by my new friend and Russian Tortoise, Gaia: a sweet, magical, Taurean-born being possessing earthy, feminine energy, as her name suggests. Gaia's name was spoken to me from the Universe as I listened to ancient mantras on the way home from receiving her into my life. She was restless in her box, but instantly calmed to a stillness with the sound of the first mantra playing. Ironically, as I listened to it and sang the words, the only thing that pervaded my thoughts and essence was the Gayatri Mantra, even though the mantra I was singing was not this one. I only had Gayatri on my mind for some odd reason and didn't realize I hadn't been listening to it, until hours later after reaching home. So while I sang the mantra playing, I heard the word "Gayatri" in my head and instantly thereafter, Gaya...Gaia. I turned to my little friend and knew. The Universe and she had both spoken her name to me through the ancient mantra playing. And now I know why.