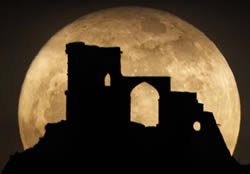 Visions, ideals and higher consciousness started pouring forth with the Aquarian New Moon in January and with it a stirring of the revolutionary spirit deep within each one of us. Aquarius is the archetype of rebellious individualization, listening to soul guidance from within instead of following learned paradigms and social conditioning. This month the full illumination of consciousness is represented by the Sun Mercury conjunction in Aquarius and reflected by the Full Moon in Leo. With the Sun and Mercury, more Aquarian frequencies are bringing the potential of a higher consciousness available to the collective. With this you might just get ready for a new level of insights and breakthroughs.

At the end of last year I had the pleasure of listening to a talk by Marianne Williamson who has become one of the spearheads of the Occupy Movement. I thought she was one of the most eloquent and smart women I have heard in a long time. I believe the Occupy Movement around the country has the potential to spark a deep transformation of society. But, as Marianne Williamson says: "We have to keep it smart, non-violent and growing..."

With Uranus in Aries for the next 7 years "WE THE PEOPLE" can become peaceful warriors for freedom and progress, taking on the rights and duties written in the American Constitution.

We are learning to become inspiring role models for each other, ringing in the new millennium, the Aquarian Age dawning. We can be a beacon of light in the darkness. It also might leave us with an open heart and the willingness to help and contribute to others in dire straits.

The king of the zodiac, the sign of Leo, is represented as a fire sign with ambition, creative self-expression and leadership skills. No project to big to take on, no mountain to tall to climb... With the Full Moon in Leo you are called to develop individual power and courage in the face of opposition and difficulties. Many individuals make up what we would call a grass root movement. You and I, we can make a difference! Self-empowerment is to take care and change things you can in your surroundings, by being a peaceful force for the Good in the world.

With the New Moon in Pisces we will be able to deeply feel our human connection and sense the oneness of spirit. You might find yourself more delicate, sensitive and impressionable than usual. I would suggest, rather than trying to reestablish your shield and trying to function normally, to allow your empathy and compassion to deepen and guide you.

With Neptune entering its own sign Pisces Feb 3, a new era begins with an uprising of a new consciousness. Throughout history, when Neptune was in Pisces there was a spiritual renaissance and new religions like Christianity spread like a wild fire through the East and Buddhism reached China from India.

Neptune is offering the gift of compassion and a sense of oneness which will help with the rough journey we are on right now. Turning to each other for support, advice, help and love is a smart way to deal with life's challenges.

This is the high road to walk and cooperation in that spirit is the only way to do the best for the most people.

Shakti Carola Navran has been an evolutionary astrologer, published author and now columnist for Maui Weekly. In her astrological practice she has been giving readings for people from all over the world for 33 years in person, through Skype or on the phone.

Her approach is with the perspective of Evolutionary Astrology which reads the psycho-dynamic information of your chart in the bigger frame of the evolution of your soul - your karma. It usually goes very deep and can give you a very significant perspective onto yourself and your life.