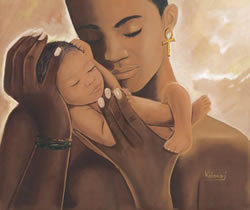 There are many reasons for this. M represents the element of water.

Just think - what does the embryo and fetus live in while gestating in the mother's womb? What covers most of Mother Earth? What makes up most of our physical body?

Amazingly, if you turn the letter M upside down, you get the letter W - for Water. The word 'Womb' begins with W and has a strong 'M' sound. It sounds very similar to 'OM'. These are not coincidences.

When letters were created, each one had a mystical meaning. This is true for all languages.

'M' was thought the most sacred letter of all, since Water is absolutely necessary for all life. 'Woman' begins with W and has an M in the center.

So this letter is open to inspiration and new ideas. The combination of balance and inspiration gives the M the ability to Manage with authority - whether it be managing a household, an event or a business.

This even extends to the position that the letter M has in the Western alphabet - 13/4.

Say the letter 'M' out loud. It is the ONLY letter pronounced with your mouth closed.

Since M symbolizes Water, a closed mouth represents the immense silence of the deepest parts of the ocean. From here all life emerges, and the waters are mute.

There is great power in silence. Our most wonderful inspiration comes when our mind is quiet and still. A mind at rest can listen to the heart. Those are the moments you renew. On the other hand, when surrounded by noise, your mind is disturbed.

We sleep in silence, so that our mind and body can renew every night. When we wake up, we change from rest to action - a change so vital to living a meaningful and healthy life.

This continual change from movement to rest is symbolized by the waves in the letter M.

If your first or last name begins with M, you have all these great qualities within you.

As with every number, each letter has a shadow side. Once we understand the shadow side, we can recognize it, and make a choice. The art in all of this is not to judge yourself or others, but to decide to embrace Being at One again.

The shadow side of M is cold and unfeeling. This is when the closed mouth symbolizes being inexpressive and distant. With a prominent M you may feel hemmed in at times. You work hard and are conservative. You also may forget to take time out and just relax. That's the 4 - symbolizing discipline and work.

Give yourself gentle reminders to enjoy all you have created. Go with the flow. Just like water.

M literally looks like a Mountain range and reaches for great heights and impact. This is why we have words such as Mountain, Millionaire, Magical, Momentous, Majestic, Miracle, Moment, Mega, Meta, Maximum, Mythical, Money and Master that begin with M.

When you express the shadow side of M, you create the opposite effect - Minimal, Minus, Micro, Martyr, Melancholy and words beginning with 'Mis' - like Mis-take, Mis-interpretation, Mis-understanding, Mis-led.

For all Mothers, the symbolic connection of the sacred letter M to water, change, life and mastery is completely apt and wonderful.

Oh, and even the word Multi-tasking and Micro-manage are covered!

Here is a toast to all Mothers.

Tania Gabrielle - Celebrity Numerologist, Composer and Author - is a regular guest on radio shows across the globe. Her insights have been published by the New York Times, Los Angeles Times, ESPN Magazine, Essence and US Magazines. She writes a highly popular free current events e-newsletter as well.