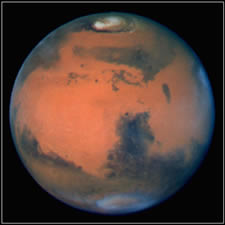 In Astrology Mars rules our energy and our sex drives, and in mythology Mars is the god of war. He is the lower octave of Pluto. Mars is the ruler of Aries, and he symbolizes new beginnings and a feisty temper. Mars gives us our reason to get out of bed and get dressed in the mornings. Mars breathes life into situations and then puts them against the backdrop of time to animate our world. When Mars is afflicted jealousy, resentment, envy, and rivalry rear their ugly heads.

When a planet is in retrograde, it is lining up next to us (the Earth) on our solar race track. Much like passing a car on the highway, there is a period of time where the planet (auto) appears to be moving backward. Because the planet is very close to the Earth, its gravity has more influence on us. Planets outside of our orbit (Mars through Pluto) appear brightly in the night sky when they are in retrograde.

Retrograde is always a great time for viewing Mars. The red planet should be rising shortly after the Sun sets, as his retrograde begins, and then rise earlier and earlier each day. Mars will continue to rise earlier after his retrograde ends, but his rate will slow. And, his distance from us will increase, so he won't be as bright in the sky. Mars' retrograde only happens about once every two years, so be sure to take a moment to look up at the bright red dot in the night sky.

Some of us may notice that our energy is low during a Mars retrograde. Others may still have plenty of energy, but the projects they begin tend to fail, or at least end much differently than they intended. Mars' retrograde can generate quite a bit of confusion, and that confusion can twist the outcome of the story of our lives. The "underdog" is more likely to succeed during this time. False starts and hard work are also usually associated with a Mars retrograde. I, personally, have noticed that most of my rechargeable batteries need to be replaced during Mars' retrograde.

This year Mars will be doing his entire retrograde in the sign of Libra, and people with dominate Libra in their charts may find this time to be more difficult than the rest of us. Libra rules love and relationships, but she also governs money, beauty, and comfort. Libra is the diplomat of the zodiac, and she specializes in manners, courtesy, and small talk. Mars traveling retrograde in Libra may keep many of us switching sides. We could have trouble distinguishing what is really fair and equitable, so we will keep changing our behavior in an attempt to achieve some illusion of balance in our lives. Relationships may sit on the see-saw at this time too... he loves me, he loves me not, he loves me, etc. Libra loves comfort and the finer things in life, and Mars' retrograde may encourage many of us to become extravagant. Ask yourself twice, "Do I really need this?" before making any major purchases. And, of course, Mars in Libra will bring out the physical side of love. Erotic entertainment and romance may become more interesting to us during this Mars' retrograde.

Mars will be arguing with Venus as his retrograde begins on March 1st. This argument could energize Venus' love of opulence. We may be tempted to indulge ourselves, or even invest in some crazy scheme. Mars and Venus should separate after about four or five days, and outside of aspects with the Moon and a few quick winks from Mercury, the Sun, and Venus, most of March should be typical Mars retrograde kind of days (energy confused or sluggish).

Early in April Jupiter, Uranus, and Pluto will be lining up to create a T-square (very difficult aspect) bringing disappointment, betrayal, and strife to many of us. Mars will also be well on his way to adding the forth dimension to this T-square forming a grand cross (the most difficult aspect in astrology), which will hit it's climax around April 21st through the 23rd. We also have eclipses coming in April, so Mars' retrograde will be just one ingredient in this recipe. But, it is a very, very important ingredient. The lunar eclipse on April 15th will also be in Libra, and that could really get this grand cross "rocking!" There could be all kinds of misdirected and misunderstood energy flying about leading to accidents and possible tragedies throughout most of April, but especially around the time of the lunar eclipse.

By May 1st, Mars will have enough distance from the grand cross that it will be of no influence anymore, and life should return to a more typical Mar's retrograde. Mars will have to deal with one quick opposition from Venus on May 10th, bringing impositions and hurt feelings to the foreground, but the rest of the month should be without any big incidents. We may find that, after all the turmoil in April, our energy is low. It would be an excellent time to schedule some time off and even take a relaxing vacation, if that is possible. Mars will turn direct on May 19th, and often the day of direct station is the most difficult day of any retrograde. Luckily there won't be any planets aspecting Mars while he turns around, but there could still be some issues to deal with.