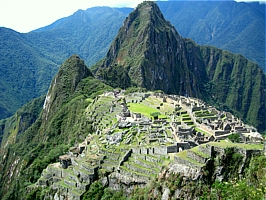 Situated at an elevation of about 6,750 feet above the Urubamba Valley, 50 miles NW of Cuzco, Peru, lies the Lost city of the Incas or as it is better known - Machu Picchu. A fortress city of the ancient Incas, the extra-ordinary pre-Columbian ruin is 5 sq. miles of terraced stonework linked by 3000 steps. It was virtually intact when discovered by Hiram Bingham in 1911.

Machu Picchu (old peak) sits on a mountain site of breathtaking beauty in the middle of a tropical mountain forest. Giant walls, terraces and ramps which appear as though they have been cut naturally into the continuous rock escarpments make this city an architectural masterpiece. The Incas never used mortar. Most of the structures are built of granite blocks cut with bronze or stone tools, and smoothed with sand. The blocks fit together perfectly even though none of the blocks are the same size and some have as many as 30 corners. The joints are so tight that even a credit card can't be forced between the stones. Another unique thing about Machu Picchu's architecture is its integration into the landscape. Existing stone formations were used in the construction of structures, sculptures are carved into the rock, water flows through cisterns and stone channels, and temples hang on steep precipices.

The Architecture
The full extent of Machu Picchu's colossal conception can only be realized when you view the city from the nearby observatory of Intipunku. The city is an astounding achievement in urban planning, stonemasonry, architecture and civil engineering. The complex can be divided into three distinct sections: Religious, Agricultural and Urban.

Machu Picchu is comprised of about 200 stone buildings most of them residential. It is believed that about 1200 people lived in the city, most of them women, children and priests. The houses had steep thatched roofs and trapezoidal doors; windows were unusual. Some of the houses were two stories tall; the second story was probably reached by rope ladder. The houses, in groups of up to ten gathered around a communal courtyard, or aligned on narrow terraces, were connected by narrow alleys. At the center were large open squares; livestock enclosures and terraces for growing maize stretched around the edge of the city.

In the Southern part of the Urban section lies the 'jail'. Excavators found a series of niches carved on a rock with elements that included man size niches, stone rings that would have served to hold the prisoner's arms and underground dungeons. Next to the 'jail' are the 'intellectual's quarters' with tall walls, nooks and windows. These were accommodations for the Amautas or high ranked teachers. One of the quarters has several circular holes carved on the rock floor. This room is believed to have been used to prepare dyes and is called the 'mortar room'. The Royal sector has ample buildings typical of Inca royalty. Here lies the "Temple of the Sun", a circular tower with the best stonework of Machu Picchu and used for astronomical observations. Its base forms a cavern known as the Royal Tomb.

Towards the center of the citadel is the Religious section. It contains splendid architecture in masonry and stonework, the most impressive of which is the Intihuatana shrine. Intihuatana means "for tying the sun" or "hitching post of the sun". As the winter solstice approached, when the sun seemed to disappear more each day, a priest would hold a ceremony to tie the sun to the stone to prevent the sun from disappearing altogether. The Intihuatana was also used to make astronomical observations. The city is also home to the Great Central Temple and an attached smaller temple called the Sacristy. Finally, there is the "Temple of the Three Windows" so called because of the trapezoidal openings on the east wall. Recently, the "Temple of the Moon", located halfway down an underground chamber on the north side of the Huayna Picchu (young peak, an hour's climb from Machu Picchu) was discovered.

For agricultural purposes and to grow crops like potatoes and maize the Incas used advanced terracing and irrigation methods. They reduced erosion and increased the area for cultivation. The yield probably sufficed the people of the city but was not enough for export to Cuzco. This is yet another reason why Machu Picchu remained a hidden city until Bingham's discovery.

The fact that even five centuries in the grip of the Peruvian jungle has deprived the city only of its thatched roofs is proof enough of its endurance and strength and the depth of knowledge possessed by the Incas.

The Purpose
Exactly what the purpose of the city was is uncertain. It was most likely a royal retreat and religious estate. Built between 1460 and 1470 AD by the Incan ruler Pachacuti Inca Yupanqui, the city is situated high above the Urubamba River canyon cloud forest. Thus, a fair assumption is that the city did not have any administrative, commercial or military use.

From the way the city has been designed with large palaces and temples and residences for support staff, it is assumed that it was a royal retreat. It was also most definitely used for astronomical observations. Machu Picchu was thus a city of temples, palaces and observatories and was the home of the Inca ruling classes. From here, high priests made observations and calculations enabling them to chart the heavens - a knowledge which gave them both religious authority and temporal power.

How The City Was Lost
While the purpose for which Machu Picchu was built is fairly clear, there has been no concrete theory as to how the city was lost.
While the Spaniards invaded and ruined much of Peru, none of the Spaniards' chronicles make mention of Machu Picchu. Since the Spaniards took great pains to document everything in detail, it seems unlikely they ever discovered Machu Picchu. Wars between rival Inca tribes were common too. They often resulted in the annihilation of entire tribes. One theory believes this to be the fate of the citizens of Machu Picchu. Another possibility offered is that perhaps a novice priest defiled one of the sacred Virgins of the Sun. As per Inca customs anyone found guilty of sexually violating an 'ajilla' was not only put to death himself, but the inhabitants of the whole town including animals were slain. The entire place was damned so that no one could find it. One more theory suggests that the entire city was ravaged by an epidemic. The skeleton of a rich Inca woman suffering from Syphilis was found by Bingham. Perhaps the city was plagued and hence quarantined by authorities.
What brought about the depopulation of Machu Picchu is one of the deepest enigmas surrounding this sacred site. Whatever it was, the site remained untouched until Bingham discovered it in 1911 and then the world found Machu Picchu!