Written by: Acharya Buddharakkhita
Published on: May 16, 2013
Category: The Dhammapada 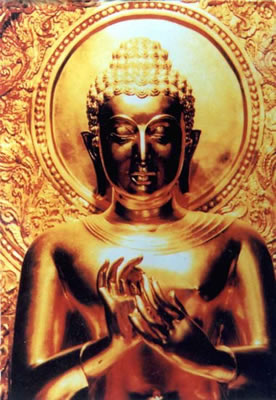 60. Long is the night to the sleepless; long is the league to the weary. Long is worldly existence to fools who know not the Sublime Truth.

61. Should a seeker not find a companion who is better or equal, let him resolutely pursue a solitary course; there is no fellowship with the fool.

62. The fool worries, thinking, "I have sons, I have wealth." Indeed, when he himself is not his own, whence are sons, whence is wealth?

63. A fool who knows his foolishness is wise at least to that extent, but a fool who thinks himself wise is a fool indeed.

64. Though all his life a fool associates with a wise man, he no more comprehends the Truth than a spoon tastes the flavor of the soup.

65. Though only for a moment a discerning person associates with a wise man, quickly he comprehends the Truth, just as the tongue tastes the flavor of the soup.

66. Fools of little wit are enemies unto themselves as they move about doing evil deeds, the fruits of which are bitter.

67. Ill done is that action of doing which one repents later, and the fruit of which one, weeping, reaps with tears.

68. Well done is that action of doing which one repents not later, and the fruit of which one reaps with delight and happiness.

69. So long as an evil deed has not ripened, the fool thinks it as sweet as honey. But when the evil deed ripens, the fool comes to grief.

70. Month after month a fool may eat his food with the tip of a blade of grass, but he still is not worth a sixteenth part of the those who have comprehended the Truth.

71. Truly, an evil deed committed does not immediately bear fruit, like milk that does not turn sour all at once. But smoldering, it follows the fool like fire covered by ashes.

72. To his own ruin the fool gains knowledge, for it cleaves his head and destroys his innate goodness.

73. The fool seeks undeserved reputation, precedence among monks, authority over monasteries, and honor among householders.

74. "Let both laymen and monks think that it was done by me. In every work, great and small, let them follow me" - such is the ambition of the fool; thus his desire and pride increase.

75. One is the quest for worldly gain, and quite another is the path to Nibbana. Clearly understanding this, let not the monk, the disciple of the Buddha, be carried away by worldly acclaim, but develop detachment instead.