The Haunting History Of Ghosts 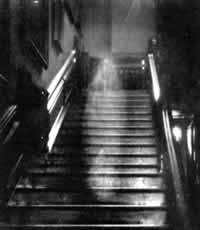 The belief in life after death is a common denominator among most of the world's major religions. According to the available archeological and anthropological evidence, this concept grew out of the earliest forms of adoration. Primitive peoples developed the notion of worship with the belief that paying homage would result in personal and group compensation. Some were monotheistic, while others worshiped many objects or deities. Whether worship meant sacrifices, complicated ceremonies or merely a mutual respect between humans and nature, it all added up to a dependence on a higher source for survival.

Primitive societies believed in spirits. For some, everything had a spirit. For others, spirits were the higher beings that they worshipped. Some were able to personally meet, see or commune with spirits, while others simply knew they were there and that was enough. The natural evolution of worship or adoration involving spirits always seemed to lead to a point where good, bad, indifferent or mischievous spiritual beings all co-existed. Evil or mischievous spirits were the most likely to appear to people for the purpose of causing trouble.

Tragedies, unexplained events or sickness were blamed on evil or mischievous spirits. Anyone who claimed to be able to commune with spirits faced the danger of being blamed for calamities attributed to them. Even people chosen as religious leaders could quickly fall from favor if signs appeared that evil spirits were at work in the community. These signs could be normal events in nature like an eclipse or harvest moon. Melted footprints in the snow that became misshapen might make people think that devils were afoot. Milk that soured too quickly, a well that went dry or a sudden outbreak of sickness could also be interpreted as being the work of evil spirits.

As cultures grew, their religions became more complicated. Mythologies and folktales were developed or incorporated into belief systems. The rewards offered by deities were no longer just temporal, but eternal. In some cultures the afterlife became another world with it's own complicated system of government, rules and regulations. In others, it was merely a continuation of life. But if there were rewards, there would also be punishments. People who committed evil deeds or failed to practice their religion would be punished in some spiritual way. The miscreant might be sent to a lower realm or be earthbound after death. With this change, came the idea of ghosts. Unlike spirits which are generally considered to supernatural beings, ghosts are thought to be disembodied humans. Those enjoying their heavenly reward might come back with an encouraging message, while earthbound souls might appear to taunt or seek vengeance on the living.

People who believe that ghosts are disembodied humans point out that they are sometimes interactive being able to channel through mediums, appear and speak with the living, cause physical phenomena and display changing behavior patterns. Much of what is believed about ghosts as humans in the afterlife comes from the Spiritualist Movement.

In 1848 the Weekman Family of Hydesville, New York, reported a series of strange knocks at their door when no one was there. An eight year old living in the home said she felt an unseen hand running up and down over her bed sheets. Just a few weeks after the Weekmans moved out, the Fox Family moved in and also reported hearing the knockings. With the help of their brother, Margaret and Katie Fox worked out an alphabetical code that allowed them to interpret the knockings. The messages seemed to be coming from a man murdered in the house some time ago. A skull was later unearthed in the basement.

The incident convinced the sisters that communication with the dead was possible and, in 1849, Margaret Fox demonstrated her abilities to channel messages from the dead. The next twenty years saw the birth of Spiritualism as a religion. Spiritualist Ministers who either felt, saw or channeled with disembodied humans offered their congregation messages from dead friends and relatives.

Spiritualism had strong supporters and powerful enemies. Sir Arthur Conan Doyle, best known for his Sherlock Holmes stories, became an avid believer and gave his first lecture on the subject in 1917. Doyle's friend, famous magician Harry Houdini, wanted to believe, but became a strong foe of Spiritualism when he came across several mediums who were complete fakes. As more fake medium hunters followed in Houdini's footsteps and traditional religious leaders spoke out against it, The Spiritualist movement lost much of its momentum.

Those who claim that hauntings are merely events from the past being played back in the present point out that many ghosts show no sign of interaction with the living. Dressed in clothes from a particular period in history, ghosts seem to be go about their normal business just as living people would. A ghostly priest walks across a room in an ancient abbey. Ghostly soldiers talk and play cards in the room of an old fort. A long dead Victorian family is seen picnicking under a tree. In each case there is no interaction with living persons present, just a very natural scene from the past.

Believers in precognition (seeing visions of the future) and retro-cognition (seeing visions of the past), say that ESP is the answer to the ghost phenomenon. They believe that anyone can see a glimpse of the past or future at any time. They may be right. I met a man in 1988 who had recently purchased and moved into a home near Chicago. As a person known to investigate the paranormal, he called me because he kept seeing a woman walk down various hallways in his house and then vanish! The mysterious figure looked real, but disappeared several times right before his eyes. He made drawings of the woman for me so I would know what she looked like. As a matter of course, I spoke to some of his neighbors. I asked if any of them had seen a woman that looked like the one in the drawings? None had. Although the man lived alone, I also met with several of his family members to see if they knew anyone that looked like the mysterious woman. They did not. Unable to offer an explanation, I lost touch with the man for several years.

While presenting a seminar in Chicago during 1994, the same man called me at my hotel and invited me over his house. I wanted to see if anything had come of the case, so I agreed to come over. When I arrived, the man invited me in and we proceeded to his family room. I was stunned when I saw a woman sitting on the couch who matched the exact description of the drawing that had been made years earlier. Before I could speak, the man introduced the woman as his wife. They had met six months before and been married just one month. Prior to that and during the time of the odd visions, he had not known or yet met the woman. Without knowing it, the mysterious figure walking through his home as an apparition in 1988 began a real woman who he met and married in 1994. It was clearly a case of seeing a future event in present time.

It's likely that these popular explanations for ghosts may all be a part of what we think of as paranormal activity. Science has been set up as a means to explain every aspect of our world using theory and conjecture, and to do so without apology. When a theory or hypothesis doesn't work out, they just throw it out and make up another. The failure of science to examine paranormal activity without trying to debunk it, leaves us with only two choices regarding the unexplained. We can either totally ignore everything odd that goes on and assume it has some scientific or physical explanation, or we can make guesses based on the available evidence.

Ghosts may be nothing more then the result of a human desire to exist beyond the grave or the ultimate gag that the Universe is playing on us. Whatever else ghosts maybe, they are a question lacking an answer. As humans, we owe it to the satisfaction of our own curiosity to try and find that answer.