Written by: Janet (Sparrow) Moon
Published on: May 1, 2012
Category: Astrology 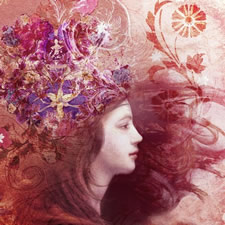 May 15th through June 27th, 2012. Venus is a bright star that can presently be seen in the western sky shortly after sundown. Get out and take a look before she is gone, because over the next few weeks she will be sinking slowing into the horizon.

Venus is the ruler of love and money, and her retrogrades can slow down and even hault progress in those areas. Venus' retrograde occurs about every other year, and this time she will be dancing madly backwards in the dynamic sign of Gemini. Gemini loves two of everything, and some of us may actually find ourselves torn between lovers. We may also be more tempted to step out on a committed relationship. Gemini likes variety. Often when a planet is in retrograde, it brings up the past. It's likely that lost loves will return during this time, but with Venus in Gemini, its more likely to be a "booty call," rather than an opportunity to reunite long term.

When a planet is in retrograde, it appears to be moving backward against the backdrop of the universe. All of the planets except the Sun and the Moon are in retrograde sometimes, because the Earth is not at the center of the solar system. Actually the retrograde planet is either passing us or being passed by us during a retrograde cycle. It's similar to passing a car on the highway. The car appears to be moving backward for a few moments as we pass by. Naturally, because the planet is closer to us during a retrograde, its gravitational influence is greater. Mercury's retrograde gets a lot of attention because it's a fast planet and turns retrograde 3 or 4 times a year. Venus' retrograde is actually more powerful than Mercury's because she is closer and larger than Mercury.

Venus will begin her retrograde on May 15th at a very positive aspect with Saturn. Saturn will help to keep our moods and our love lives feeling very stable at that time. We may not even notice that Venus has turned retrograde right away. But, as Venus slowly sinks into the horizon, we could notice that our relationships are becoming a bit "boring." There is also a good possibility that cash flow will diminish. We will really begin to feel Venus' tug by early June. As Venus approaches the Sun, she will engage the solar eclipse on June 4th. This eclipse will line up with Venus and create a very negative aspect to Mars. Its been said that, "Women are from Venus, and Men are from Mars." When these two square off, some will go to extremes. There could be arguments with loved ones, and some of us will "get stupid" with our credit. We will probably be most likely to cheat on our relationships at this time too.

The Venus-Mars square should be over by the 2nd week of June, and Venus will be moving her way across the universal stage to the position of morning star. Venus may get blamed for some difficulties around this time, but it will actually be a battle between Uranus and Pluto. Venus will still be adding a little flavor to the turmoil, as she continues to flatten our relationships and increase our desires. Venus will turn direct on June 27th, but in the days leading up to her direct station, the outer planets will be reaching the peaks of 2 different battles. And, the inner planets will be joining the fight just a couple of days after Venus turns direct. The whole week from June 23rd through June 30th could be difficult.

How will Venus' retrograde affect you? Time to get out your natal chart. Venus' retrograde will run from 23 degrees 59 minutes to 7 degrees 30 minutes in Gemini. Check and see which of your houses Venus will be transiting. This will give you an idea of what areas of your life will be affected. Also if Venus crosses any of your power points (ascendant, nadir, descendant, or mid-heaven), you may find that those days bring big challenges. If your still not sure, contact your favorite astrologer. They should be able to clear up any confusion very quickly.