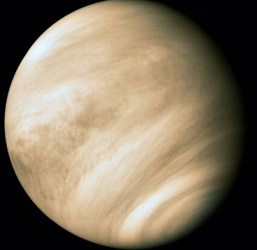 We astrologers don't talk much about Venus' retrograde, mostly because it only happens every eighteen months. Unlike Mercury's retrograde, which occurs every three to four months. Venus' retrograde is every bit as important as Mercury's, maybe even a bit more important. When a planet is in retrograde it is either passing the Earth or being passed by the Earth on our "solar race track." Venus travels a bit faster than the Earth and orbits the Sun every 225 days. When Venus is in retrograde, she is passing between the Earth and the Sun and is very close to us, therefore her gravitational influence will be stronger.

In general, when a planet is in retrograde, its time to reevaluate that area of our lives. Mercury is the ruler of communication, so we often catch up with old friends and family under a Mercury retrograde. Venus rules partnerships, marriages, money, and art. Venus can sometimes persuade us to be extravagant. She loves to surround herself with beauty and luxury. I've heard astrologers say that lost lovers return during a Venus retrograde, but that has not been my personal experience. Mercury's retrograde seems to be a more favorable time for ex's to reunite. Relationships seem to flatten out while Venus backs up. Venus also rules money, and I have noticed that commerce and cash flow can slow down.

This retrograde Venus will be doing her whole backwards transit in the sign of Capricorn. Capricorn is the ruler of discipline and restrictions. Capricorns work hard for what they have, and they don't have a lot of respect for people who overindulge. Those of us who got a little crazy spending over the holidays (even those of us who have been foolish with our finances over the past year and a half) will probably be doing without many things during this retrograde. Venus also rules love, and Capricorns take love very seriously. If we've been "letting things slide" in our relationships, our partners may demand some immediate changes. On the flip side, it will be a great time to catch-up on creative projects. We may decide to go back through old patterns or recipes to create something all together new. Capricorns love to build things.

This Venus retrograde will begin on December 21st at 29 degrees Capricorn. Some astrologers call the 29th degree the hero degree. Many of us will get to rescue someone around that day. Her backward transit will not hit any really negative aspects until mid January, but she will probably get blamed for a big dispute between seven major planets from late December through the first nine days of 2014. Three of those seven planets will be in the sign of Capricorn along with Venus. This conflict could amplify Venus's effects even more. These planetary alignments will create turmoil in cardinal signs (Aries, Cancer, Libra, Capricorn). Cardinal signs are where we start things. They represent the beginning of each season - a time for change. We may find that life is forcing more changes upon us, or we may find that new projects are hitting major setbacks.

After the cardinal battle has subsided, Venus will cross in front of Mercury and then the Sun. We should feel the effects from January 5th through January 12. It will be a excellent week to make use of the positive side of Venus' retrograde - get out those arts and crafts. Winter pastime projects could turn into artistic masterpieces.

Around January 14th, Venus and Mars will begin to square-off, and some of us may overindulge for the next two days. Be careful, if you do slip out of your regimen, there will be hell to pay before Venus' retrograde ends. Two slow outer planets, Jupiter and Pluto, will be lining up for their tag-team match as Venus and Mars separate. Plans will be very likely to fail, especially the "hare-brained" ones through the end of January. In fact, Venus will travel backward to conjunct Pluto as she changes back to a forward motion (direct station). This will add Venus' flavor to the failures. Do not push a loved one, and do not give your partner an ultimatum. It is very likely to blow-up in your face. Do be gentle with yourself and others as January and Venus' retrograde ends.

Our next Venus retrograde will begin in July 2015, and Leos get ready! Venus will be taking a close look at your relationships and finances then.